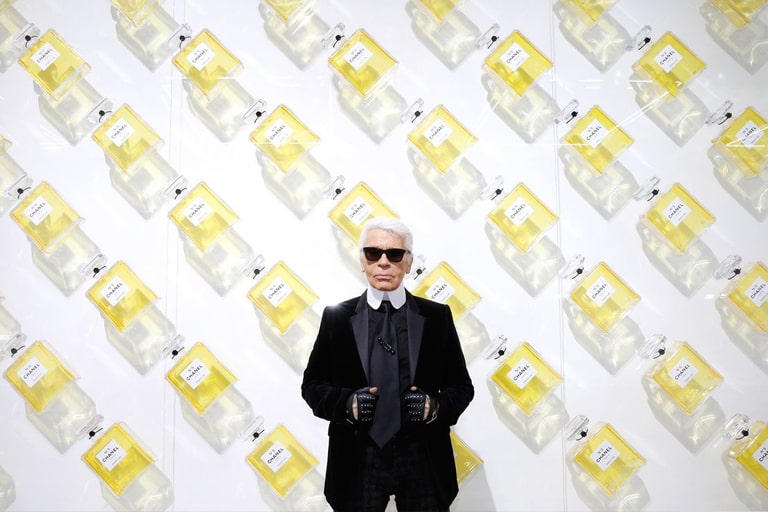 Karl Lagerfeld was born Karl Otto Lagerfeldt in Hamburg, Germany. Often lauded for his constant reinvention, he removed the “t” at the end of his last name early in his career in order to make it sound “more commercial.” Lagerfeld’s father, Christian, made his fortune by bringing condensed milk to Germany. Karl and his older sister, Martha, and a half-sister, Thea, grew up in a wealthy home. The intellectual activity was encouraged at the Lagerfeld home. His mother, Elizabeth, was an accomplished violin player and talk at the dinner table often included subjects such as religious philosophy.

When Adolf Hitler rose to power in the 1930s, the Lagerfeld’s moved to a rural area of northern Germany, where, as Karl would later recount, he was cut off from any knowledge about the Nazis. From an early age, Lagerfeld expressed an interest in design and fashion. As a child, he often cut out pictures from fashion magazines. He was also known to be critical of what others wore to school. But it wasn’t until his teen years after his family had returned to Hamburg, that Lagerfeld immersed himself in the world of high fashion.

Sensing his future lay elsewhere, 14-year-old Lagerfeld made the bold decision, with the blessing of his parents, to move to Paris. He’d been there just two years when he submitted a series of sketches and fabric samples to a design competition. He ended up taking first place in the coat category and meeting another winner, Yves Saint Laurent, who would become a close friend.

Karl Lagerfeld as a Junior Assistant

Soon, Lagerfeld had full-time work with French designer Pierre Balmain, first as a junior assistant, and later as an apprentice. It was a demanding position, and the young designer remained in it for three years. He took work as a creative director with another fashion house before finally, in 1961, striking out on his own.

Good work soon followed, with Lagerfeld designing collections for Chloe, Fendi (where he was brought on to oversee the company’s fur line) and others. Lagerfeld became known in the fashion industry for his innovative, in-the-moment styles. But Lagerfeld also had an appreciation for the past, and he often shopped in flea markets, finding old wedding dresses to deconstruct and reimagine.

By the 1980s, Karl Lagerfeld was a major star in the fashion world. He was a favorite among the press, who loved to chronicle his changing tastes and social life. Lagerfeld kept company with other major stars, including his good friend Andy Warhol.

During his career, he developed a sort of hired gun reputation for jumping from one label to the next, and also put together a track record of success that few designers can match. At Chanel in the early 1980s, he did what few thought possible: He returned what was perceived to be a near-dead brand back to life with a revamped ready-to-wear fashion line.

Around that time Lagerfeld launched his own label, in 1984, which he built around the idea of what he described as “intellectual sexiness.” Over the years, the brand developed a reputation for quality tailoring with bold ready-to-wear pieces like cardigan jackets in bright colors. In 2005 Lagerfeld sold the label to Tommy Hilfiger.

Lagerfeld, whose work crossed over into film and photography, continued to maintain a busy schedule. In 2011 he designed a line of glassware for the Swedish company Orrefors and signed on to create a new clothing collection for Macy’s. In 2015 he opened up his first Karl Lagerfeld store in Doha, Qatar.

With his distinctive appearance, including his powdered white ponytail and dark sunglasses, and his very public devotion to his pampered pet cat, Choupette, Lagerfeld’s behavior was almost as captivating as his gorgeous and sometimes daring fashion designs.

Here are 10 fashionable facts you should pick up from his legacy: